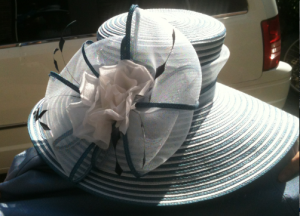 The Hat to Match

We live in a smaller town outside The Hague which has a quaint pedestrian area in town center. Shops of all sorts line the wide cobblestone thoroughfare: shops for flowers, toys, baked goods, chocolates, pharmacy, shoes, and clothes. I mentioned previously that the area is rather upscale in that the cheapest bicycle around here is 800 euro. Clothes shops are, for the most part, similar, thus I have not set foot in most of them. Till this weekend.

The dress and thigh length cardigan I’ve worn with my chosen hat before are not dressy enough for Prinsjesdag. When I mentioned with dread to my older son and his friend that I had to go shopping, the friend was shocked. I don’t think he’s ever met a woman who doesn’t like to shop. Here I am. Shopping is only enjoyable for me when done as a social activity with a friend–preferably one who spends more than I do and makes me feel smugly thrifty.

Brands at the least helpful shop.

This was a special occasion and the clock was ticking, though. I set myself a budget of 200 euro (including some birthday money) and set out to find a suit or coordinates in blue and off-white. Amazingly almost all the stores organize their goods by color. No wonder the Dutch always look incredibly coordinated–their casual elegance is often spoken in the expat community here. With my mission to Match The Hat, the shopping was a fantastically stream lined experience. Inspite of the posh fashions and other clientele, I was offered help, sometimes repeatedly in the same store, and only followed about at a respectful distance in one establishment.

What is upscale to me? Skirts 70 euro and up, casual blouses over 50, and sport coats running from 129 to 250 euro. The dress I eventually found that day, one which would work in a pinch, had semi-deep v-neck, long sleeves appropriate to the ever changing weather, and was within my budget at 70 euro. The ladies at that shop were delighted Dutch and delighted to help someone attending the Prinsjesdag events. The dress wasn’t quite the thing though, especially since I wanted the added factor of a suit jacket which wasn’t to be had without going over budget anywhere in town. I held that option in mind and decided to grin-and-bear the open mall next town over.

Next morning I announced at breakfast that I did not want to go shopping by  myself.

“Who would you like to take with you?” my husband asked as if any of the five males in our home would be made immediately available to me.

“You,” I said. And he was up and getting ready. God bless him and God bless my mother-in-law who brought him with no qualms getting on board for a day at the mall. I suggested he bring a book so he might enjoy a cafe at some point.

Inside the Dutch Parlaiment during a previous Prinsjesdag – King and Queen on their thrones.

At the mall everything summer was deeply discounted, so I found a jacket in the perfect hue at the second shop we entered (see here types of items they carry). Previously 99.95 euro, it was a steal at 15 euro. Good deals inspire my well-trained husband who knew the hat and located a dress, previously 79.95 now only…15 euro. I was trying on the pair when Ryan came carrying three more skirt options and pointing out another jacket that might be too good a deal to pass by. “On a mission,” I said. “Let’s not get distracted.” I knew he was making his mother and sister proud and commended him appropriately.

The dress required a specialized under garment purchased a couple doors down which brought my total expense to less than 60 euro–so well within budget I began to think about shoes. Ryan hit the coffee shop and held onto our purchases while I traipsed around to every shoe store. Only one possibility seemed like it would go…only…well the color was off and heel a bit higher than might be advisable for a 9am-4pm dress event with limited seating.

We headed home to sons who claimed we’d been gone “forever.” We were quite pleased with the budget, and I began to think of shoes and hair as the next preparatory expenses for Prinsjesdag 2015.

Kristin King is an author, publisher, and president of the nonprofit, Future Hope Africa. She seldom splurges on anything except her children and travel.

Posted by kristinkingauthor on September 14, 2015 in Events, Living in Holland