The Bible Says What?!? (About Your Money) C is #A2ZChallenge 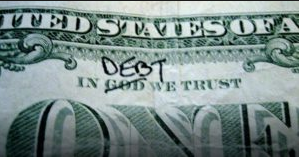 C is Cursed by Debt

The Bible says debt is a curse and slavery. Yikes! That’s some pretty hard-hitting language about owing money. Keep in mind that the Bible doesn’t say debt is a sin. It’s just not what God wants for His people; it’s not His best.

Moses wrote a sermon that takes up most of the book of Deuteronomy. He laid out blessings for obeying God and curses for disobedience. You know where this is headed. Here’s the wording:

Okay, there’s the curse. What about slavery?

The rich rules over the poor, And the borrower becomes the lender’s slave. (Proverbs 22:7)

This one makes sense to me in a very literal way. A slave works not for him/herself but for someone else. Working to pay credit card companies, to pay the bank for the mortgage, to pay the lender for the car. There is a difference between secured debt though (i.e. backed up by value of the house or car) and unsecured (i.e. backed by nothing like credit card). Either way, though, we end up paying a lot more for the item than what it was worth, and that house or car isn’t really ours until there is no longer a threat of the lender taking it away.

What if you get in over your head? Bankruptcy seems like a way to start over with a clean slate, right? Not according to the Bible.

The wicked borrows and does not pay back, But the righteous is gracious and gives. (Psalm 37:21)

I have heard testimonies of Christians who paid, over time, no matter what, even after a bankruptcy judge said they didn’t have to. They held what the Bible said above a court.

Here’s an interesting thought, no where in the scripture did God provide for His people with a loan. Makes me go, “hmm.”

What is best with regard to borrowing?

Owe nothing to anyone except to love one another; for he who loves his neighbor has fulfilled the law. (Romans 13:8)

26 Days of The Bible Says What?!? (About Your Money) are coming your way.

Other “C” Topics from #A2ZChallenge around the web:

Kristin King began her study of the financial principles in the Bible during tight times in 1999 and has never stopped learning and teaching. She recommends joining the Crown.org newsletter for uplifting testimonies, solid teaching and applications. Kristin is also available for speaking engagements as time allows. Message her on Facebook at Kristin F. Chaudoin King for more information.

Posted by kristinkingauthor on April 4, 2018 in A to Z Blog

Tags: Is Debt evil?, what does the Bible say about borrowing money?, What the bible says about Debt